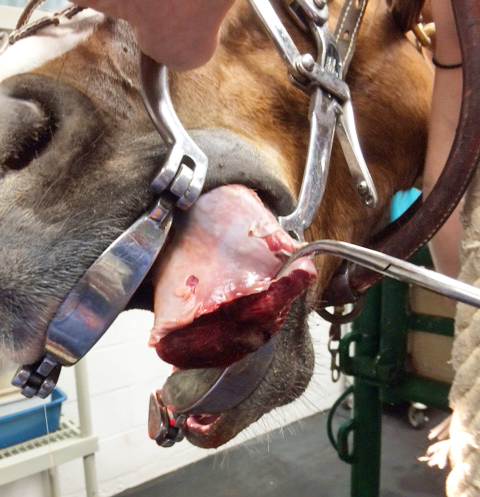 Reid and Associates Equine Clinic had a horse referred with an unusual and grotesque presentation. “Ribo” we will call him to keep him anonymous, was admitted with a history of inability to eat or drink and a swollen tongue. The horse was examined and an x-ray performed of his head which revealed the presence of a metallic foreign body – a needle embedded in the base of his tongue..

The object was carefully removed but had apparently introduced an infection and his tongue had become gangrenous, meaning the tongue was necrotic (dead) and infected with clostridial bacteria. These bacteria produce toxins that cause gangrene, which will often kill its host.

Pieces of the tongue were sliced off until we hit tissue that bled slightly and decided to stop there. We immediately initiated very high, frequent doses of antibiotics and in addition, twice daily HBOT sessions.

What remained of the tongue (pictured below) were four quadrants and a hollow center. Over two additional surgeries, healthy parts of the removed segments (above) were carefully sutured together to reconstruct the tongue into a healthy stump.

Why is Ribo’s case of particular interest to us in hyperbaric medicine? Because hyperbaric oxygen is probably what saved the horse’s life.

A gangrenous limb or appendage will very often kill the person or animal attached to it. While amputation is certainly indicated, very often, as in Ribo’s case, complete amputation was not possible without destroying his ability to breathe and swallow. While we can live without much of our leg or arm, if too much of that becomes gangrenous it compromises more tissue than we can safely remove and the infection will prove fatal unless it can be controlled. As a rule, while antimicrobial drugs are extremely effective, they require delivery by a strong blood supply and gangrenous appendages lose this circulatory delivery system.

This is where hyperbaric oxygen therapy can be critical for healing and recovery… for clostridial organisms (bacteria), oxygen at high concentrations is lethal and HBOT delivers oxygen WELL BEYOND the limits of a gangrenous blood supply.

So, for the part of Ribo’s tongue that could not be amputated, hyperbaric oxygen was the ONLY thing that could kill the remaining bacteria. While hyperbaric oxygen is often very helpful and synergistic with antibiotics in destroying infections, in Ribo’s case it was very likely the one thing that saved what was left of his tongue and therefore his very life!

Curing the infection, however, was just part of saving this horse.

Horses, and in fact most animals, use the tongue to move food around the mouth for chewing and swallowing. We might not think about it but it’s a very important function that allows us to eat. This horse was plenty hungry but chewing without a tongue was completely ineffectual. The teeth need food shifted or moved to them to be able to grind it. Without a tongue, there is no way to get the food to the teeth with every chewing motion. So, we had to use food that did not require chewing.

The next challenge was getting the food from the front of the mouth to the back of the mouth where swallowing could be initiated.

This is another function of the tongue. Ribo first had to learn that he could push food mash (in this case Purina Equine Senior) into his mouth by pushing his mouth into the bucket of food and then use the little stump of a tongue to work that into position to swallow. It took him several weeks to learn and in the meantime we kept him alive with horse soups and a Purina product known as Wel Gel which supplies nutrients and can be converted into a broth to be swallowed as a liquid. Ribo lost 200 pounds during his first few weeks of recovery but then began to gain it all back. When he finally went home he was able to maintain nutritional balance and was gaining several pounds of weight each day.

Ribo went on to make a full recovery.

He finished his racing career and is now comfortably enjoying a well-earned retirement. Ribo was extremely fortunate that the Equine Hyperbaric Center of South Florida stepped in to help out with deeply discounted HBOT treatments because for him, it was a matter of life-and-death and the chamber almost certainly helped tip the scale in life’s favor.