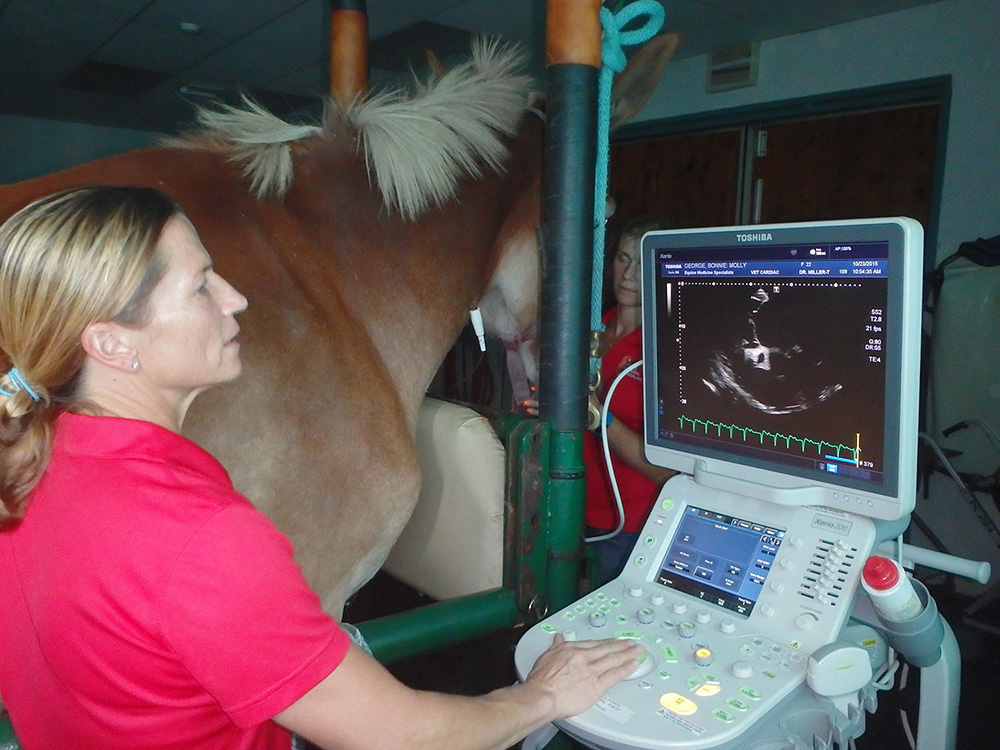 Each year, from mid-fall into early January, equine pneumonia cases rise in South Florida as horses arrive for the winter equestrian season. Meg Miller Turpin, DVM, talks about the causes and the role long distance shipping plays as well as symptoms, prevention and treatment of equine pneumonia.

Q. What is equine pneumonia?

A. Pneumonia is an infection of the lungs most commonly caused by a virus, bacteria, fungus, or any combination of the three.

Q. Why the increase from mid-to late Fall and into early January?

A. The reason for this is because South Florida has a seasonal migration of horses from the rest of the United States as well as from Canada and other countries that travel to Wellington for the Winter Equestrian Festival, Thoroughbred and Standardbred horse racing, Polo Games, and other horse events. Horses also come to South Florida in the winter just to escape the cold winter climates of our northern neighbors.

The horses are arriving after long distance transportation which makes them very susceptible to developing pneumonia, especially on horse trailers but also with air travel. Horse’s immune systems become compromised due to the stress of transportation (physical and physiological) as well as high levels of dust and particulate inhalation during transport in a horse trailer.

There are also climate changes to deal with if transporting from a colder winter climate to our more humid, warmer weather in Florida. When the immune system and lungs are compromised during long distance transport, this is the prime time for a virus to invade and cause viral pneumonia which compromises the immune system even more and sets up the perfect storm for bacterial infection in the lungs.

Q. Are some horses more susceptible to pneumonia then others?

A. Young horses are at a higher risk of developing pneumonia because their immune systems are more naïve to different viruses. We see more young racehorses in training at this time of year. The young horses are like our elementary and pre-school children who are more at risk of catching the viruses and colds that spread through the day-care or school. The young racehorses in training are under the stress of intense exercise while at the same time mingling with young horses from different areas of the country. This exposes them to all kinds of new potential viruses and bacteria that puts them at a higher risk of developing pneumonia.

Older horses also have a higher risk because their immune system may be compromised by Equine Cushing’s Disease (Pars Intermedia Pituitary Adenoma) or conditions such as malabsorption or maldigestion causing poor body condition scores.

In addition, some horses have a history of recurrent fevers and often respiratory infections before transport. Some of these horses may actually have pneumonia that has never been adequately cured and may benefit from a thorough veterinary examination and ultrasound assessment of their lung fields before shipping.

Q. How can horse owners lower the risks of long-distance trailering?

A. It’s best to allow a horse to be able to put his head down in a box stall and face backwards when transporting long distances. The horse is more likely to inhale particulate matter when its head is tied up high and facing forward during transportation. When the horse can put his/her head down, it allows proper drainage of respiratory secretions and enables the horse to cough up or snort out whatever pathogen or foreign body it may inhale, which helps prevent the development of pneumonia. Good ventilation is also important as well as frequent stops, at least every six-hours, to allow water and, if possible, even take them on and off the trailer. However, this will NOT always prevent pneumonia.

Q. What symptoms should caretakers be looking for when the horses arrive?

A. Horse temperatures should be taken immediately before, after, and for a minimum of 3 days after long distance transportation to a new environment. Pneumonia may not be clinically obvious by fever, coughing, anorexia, or nasal discharge until a few days after transport. The sooner you are able to detect any signs of illness in your horse, the better chances of early treatment and complete recovery. A veterinarian should be called at the first sign of illness after shipping to include fever, swollen limbs, cough, nasal discharge, anorexia, or colic.

A. Bacterial pneumonia is not typically infectious and the most common cause of “shipping fever” pneumonia is Streptococcus Zooepidemicus pneumonia that develops after an initial virus during transport. This common bacteria lives in the upper airway of a horse and doesn’t cause disease under normal conditions. However, when the immune system and airway becomes compromised such that the Streptococcus can gain access to the lungs, then severe pneumonia can occur.

Streptococcus can multiply extremely fast and wreak havoc within 24 hours and, in addition, the pneumonia is also commonly complicated with other types of bacteria as well. Therefore, if not treated promptly, your horse can develop a pleuropneumonia (fluid on the lungs), abscesses in the lungs, long term damage to the lungs which is often irreversible, and often ultimately death.

Although there is a form of Streptococcus Zooepidemicus that is very rarely contagious, for the most part the bacterial pneumonias that horse’s contract after long distance transportation are NOT contagious. Usually the virus has already come and gone by that point.

Q. What is the treatment for pneumonia?

A. Traditional treatment must always include broad spectrum antibiotics. Ideally, the best antibiotic choice is selected after a lung culture is obtained. Other treatments include drainage of the chest with tubes, nebulizer treatment with medications that dilate the airways and decrease the mucus film, expectorants, immunomodulators that regulate the immune system, and often IV fluid therapy and other medications to help prevent complications such as laminitis.

In addition, many antibiotics function better in a high oxygen environment. HBOT increases the circulation to all parts of the body by producing new blood vessels, thus delivering antibiotics and natural anti-inflammatory cells to sites of inflammation. Plus, HBOT decreases swelling in inflamed tissue which in turn improves circulation and antibiotic delivery to that tissue.

Q. Can you give an example of a case where HBOT was a critical component?

A. I have many cases of severe pleuropneumonia that with traditional therapy alone I feel would not have survived. The HBOT expedited healing and helped prevent farther complications from occurring.

An example is a case I had last year. A young warmblood stallion presented with fluid on his heart and severe pleuropneumonia. He had developed a large abscess in front of his heart behind his left shoulder. This is a very difficult area to treat as it gets walled off and prevents antibiotics from accessing the infected site. The owner was told that he had a very guarded prognosis for return to any athletic ability let alone life. Treated very aggressively with antibiotics, chest tubes, and HBOT for many months, he was able to return to full athletic function within 10 months of initial life-threatening infection. He even had very fertile sperm collected within weeks of his last fever to impregnate multiple mares.

I have also treated many pneumonias referred from other veterinarians that were failing to fully recover from their pneumonia after two months of traditional treatment. Once the HBOT was added to their traditional therapy, they went on to full recovery.

Q. What else is important for our readers to know?

A. The earlier you can include HBOT therapy with your traditional medicine for severe pneumonia, the better chances at a full recovery. And although many owners have concerns about the cost of HBOT, contrary to what they may imagine, HBOT can actually save money in the long term.

The addition of HBOT to the therapy may reduce the length of time antibiotics are required, may reduce the days of hospitalization required for treatment, can stimulate appetite at a time when nutritional health is a very important part of recovery, and ultimately help reduce the chance of scar tissue developing in the lungs which will change the horse’s ultimate athletic ability in the future.